Also called an EGD or esophagogastroduodenoscopy.A thin scope with a light and camera at its tip, called an endoscope, is used to look inside the upper digestive system of the esophagus, stomach and the first part of the small intestine. The endoscope is passed through the mouth and down the throat to the esophagus. It also has a hollow channel allowing a small biopsy instrument to be passed through in order to remove tissue called a “biopsy”. That biopsy is then checked under a microscope for abnormalities. Not all patient require a biopsy during an EGD.

What to Expect: During the procedure

You will be given a sedative and a numbing medicine may be sprayed into your mouth to suppress the gag reflex when the endoscope is inserted. A mouth guard will be inserted to protect your teeth as well as the endoscope. Dentures must be removed.

In most cases, an intravenous line will be inserted into your arm or hand to administer the sedation. You will lie on your left side, and, after the sedative has taken effect, the endoscope will be gently guided through the esophagus to the stomach and the beginning of the small intestine. Air will be introduced through the endoscope to enhance viewing. The lining of the esophagus, stomach and upper small intestine is examined, and biopsies can be performed at the same time.

After the test is complete, food and liquids will be restricted to prevent choking until the anesthetic wears off and the gag reflex returns. The actual test lasts about 10 minutes. There may be a sensation of gas or bloating after the procedure. Biopsies cannot be felt. Because of the intravenous sedation, you likely will not feel any discomfort and may have no memory of the test.

What can be found?

The stomach must be empty for the procedure to be thorough and safe, so you must fast about 6-12 hours before the test. You may also be told to stop aspirin and other blood-thinning medications for several days before the test. You should also arrange for someone to take you home because of the sedation during the procedure. Your physician may give other special instructions. 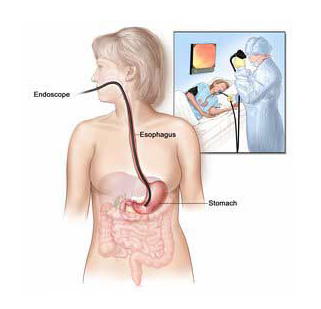